Please find below the full speech:

Good morning everybody, thank you so much for the invitation to be here with you again. Today, at the opening of this important event, I would like to share with you some remarks following the exchange rate turmoil we experienced in the past few weeks, which resulted, as you already know, from foreign triggers (the US monetary normalization process) and some domestic factors. This is the right time to take stock of the monetary policy and take the relevant steps.

First, I would like to highlight the soundness shown by our financial system in this context of volatility. Last week, we conducted an in-depth analysis in this regard when we presented our Central Banks Financial Stability Report 1but we, as Argentinians, must be aware of the strength and resilience our banks have shown.

The implementation of a macroprudential regulatory framework in line with better international practicesa process that can be traced back to the mid-90shas become a real State policy in Argentina being respected by all administrations since then. Against the backdrop of this State policy Argentina's macroprudential regulations have proved to be tighter than the Basel Committee´s recommendations. This brings about a higher degree of certainty for our financial system and for all depositors. Financial system liquidity exceeds 40% of total deposits;this indicator brings peace of mind and shows that there is still room for lending to keep on growing as it has done since late 2016 (bear in mind that last year's lending growth rate was the highest in 20 years and loans granted to households and small- and medium-sized enterprises reached historical levels in real terms). Furthermore,financial institutions' level of compliance with the capital requirement exceeds 15% of risk-weighted assets, clearly fulfilling in excess the regulatory requirement of 9% on average imposed on the ensemble of banks. Balance sheet currency mismatch stands at levels below 10% of banks regulatory capital and delinquency ratios below 2% of financial institutions portfolio quite a low level if compared to both domestic and international scenarios.

This brings about a higher degree of certainty for our financial system and for all depositors.

At the same time, both lending and deposits have followed a steady rising trend.In the case of lending, all lines have increased. Lending for commercial purposes has risen 3% monthly in May and 41% in year-on-year terms (y.o.y.). In turn, loans denominated in US dollars for commercial purposes has grown 2.9% monthly and 48% y.o.y. Mortgage-backed loans have increased 8% monthly and 160% y.o.y., while personal loans have climbed 2.8% monthly and 52% y.o.y. To sum up, total loans in pesos have risen 3% on average in May and 51% y.o.y., while loans in dollars have gone up 2.8% monthly and 48% y.o.y.

Deposits have been increasing for two years now but even if we focus on the most recent scenario we will see that they have also risen; this reinforces the idea already mentioned about the financial sector´s solvency. .Private sector total deposits have increased 3.2% so far this month and 29.2% y.o.y. Now,the greatest news this year is the momentum shown by UVA-adjusted deposits, which rose ten-fold against last year: they went from $1.15 billion in May 2017 to $11.9 billion at present. In turn, deposits in dollars have climbed 0.8% on average over the month and 10% y.o.y.

A floating exchange rate regime is another component of a macroprudential policy that tends to discourage any currency mismatch thus allowing the financial system to absorb any changes in foreign exchange parity without affecting their balance in any way.

Within the framework of inflation targeting with a floating exchange rate regime, one of the core elements is the exchange rate, which safeguards economic activity, Mand adjusts accordingly based on potential domestic and external fluctuations to which Argentina may be exposed. In turn, the interest rate curbs any exchange rate pass-through to the remaining prices of the economy.

The real exchange rate was adjusted over the last few weeks in view of the new international outlook that has been looming before us.This measure was aimed at ensuring the sustainability of Argentinas balance of payments in this new context, thereby supporting the economic growth that has been recorded for 7 quarters in a row.

Thus, the purpose of the monetary policy in the short term is to minimize the impacts that may result from such changes on domestic prices, a goal the BCRA will pursue drawing on all tools within its reach. The monetary policy rate is currently at a level which the Central Bank deems appropriate to limit the volatility we have experienced in the last few weeks and to mitigate its potential effects on the disinflation process.

I understand that many of you are not that comfortable with the level of rates fixed by the Central Bank today. In this regard, I would like to clarify that, on the one hand, the trigger factor was not the level of rates recorded during the weeks of greatest turmoil because all rate indicators evidenced disinflation against such stress levels. However, I am not going to lie and tell you that rates will come back to their prior level soon because the Central Bank has to determine a greater level of monetary tightening to rechannel the disinflation process. And I take this opportunity to repeat something we have mentioned before. Raising short term interest rates (the Central Bank fixes the 7-day repo rate and the rate on LEBAC bills of up to 5 months)is precisely the best way to assure the recovery of lending in pesos in the long run (what is relevant for making investment-related decisions), thus anchoring expectations and boosting greater price stability. Last year, the Central Bank of Argentina was bitterly criticized for following increased rate policies; however, the truth is, as I said earlier, that the highest growth in lending in 20 years was recorded last year, economy grew 4% and core inflation decreased by 1.4% monthly in the last quarter of the year. These are real data; it is what actually happened, not just a forecast. The goal of our institution at this moment is to recreate the virtuous circle of disinflation and growth that we had witnessed in 2017 even knowing that we are facing a more difficult international scenario this year.

I am asking you, who are financial analysts in your corporations, to factor in these present and future monetary restrictions when making estimationsespecially of prices. The Central Bank publishes its monetary data in the Daily Monetary Report on its website on a daily basis; such report contains in-depth information on the economys current monetary conditions with a 2-day delay.

We are doing everything within our reach to resume the disinflation path even being aware of the challenge posed by the monetary normalization process in the US and the resulting currency depreciation in emerging currencies. Rises in regulated prices will be well below those registered in the past 2 years. Particularly, the removal of taxes on energy bills will also have a significant impact in Mays index. On the other hand, agreements and collective bargaining are reached, to a great extent, by taking future inflation as a benchmark. The real exchange rate has reached the highest levels on record in our administration and is 38% more competitive than that determined prior to the lifting of foreign exchange restrictions. Furthermore, the Central Bank foreseesas shown in its latest monetary policy releasesthat it will have to keep higher levels of tightening to assure the consolidation of disinflation process in the future.

That is why we are still confident that, once these months of foreign exchange and inflation rates adjustments are over, we will resume the disinflation path. The Central Bank is using all its tools to achieve this target and will act accordingly in line with the evolution of prices in the economy.

Now, I would like to convey two important messages: one is that Argentina has a financial system which, as a result of being consistent for over 20 years, achieved sound stability and security levels; and the other is that the Central Bank is focused on mitigating any potential effects of these weeks of volatility on domestic prices. The Central Bank should be consistent enough to achieve its inflation target as it has already done with its financial stability target. Clearly, the disinflation process has experienced instances of setbacks and progress but, in the end, only consistency will guarantee success.

"Argentina has a financial system which, as a result of being consistent for over 20 years, achieved sound stability and security levels, and the Central Bank is focused on mitigating any potential effects of these weeks of volatility on domestic prices"

You can rest assured that this Central Bank will work non-stop to defeat inflation in Argentina, while safeguarding the stability and soundness that our financial system has evidenced. Thank you so much. 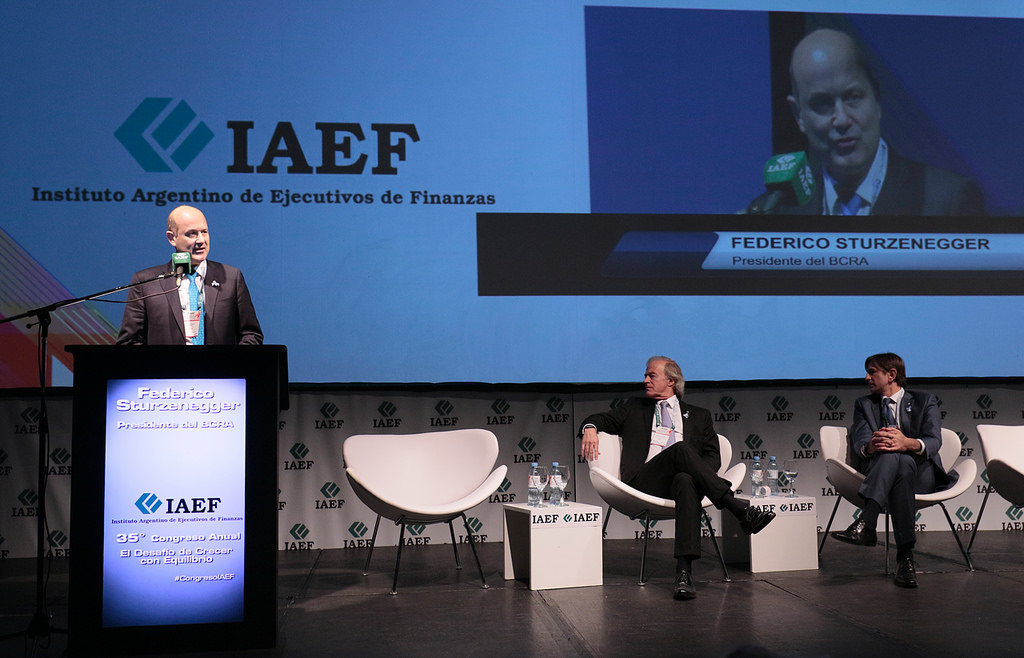