Coins of the Argentine Republic 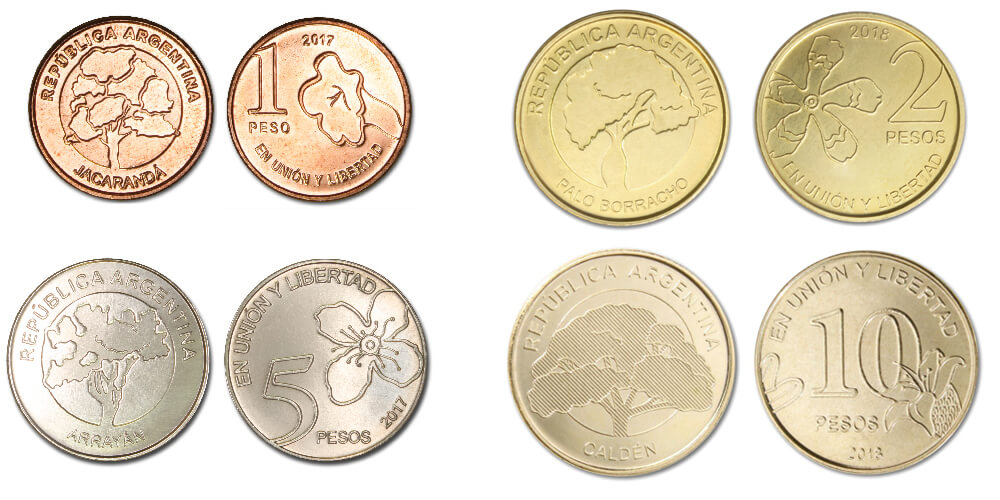 The BCRA puts into circulation ARS2 and ARS10 coins which feature a silk floss tree and a calden tree, respectively. These coins complete the Peso Series Trees of the Argentine Republic. The coins of this Series will be used alongside older coins and banknotes with the same value. The new coin series is part of the plan to standardize currency in circulation implemented through different measures such as the launch of ARS20, ARS200, ARS500, and ARS1000 banknotes; the creation of an electronic platform for interbank exchange of banknotes, and the destruction of damaged banknotes.

How to get new coins?

They will be gradually put into circulation through financial institutionsthe usual distribution channel. In addition, coins will further be provided in containers to large companies, chambers of commerce, or similar institutions. For more information, send an e-mail to operaciones.monedas@bcra.gob.ar.


Flower of the Jacaranda Tree


Flowers of the Myrtle Tree

Trees in the New Coins

Jacaranda mimosifolia. Bignoniaceae Family. Commonly known as jacaranda, tarco.
It is native to the Southern Yungas. Tree-planting extends down to the heart of the province of Buenos Aires for urban landscape purposes, particularly, on account of its purple-blue flower. If you wish to visit the most dense natural environment of the silk floss tree, you may go to the Phytogeographical Region of the Low Mountain Jungle (Selva Pedemontana). If you happen to visit or live in the Autonomous City of Buenos Aires, you may enjoy beautiful sceneries of over 11,000 jacaranda trees (according to the 2010 Census of Urban Trees on Roadsides of the City), which were mostly planted as designed by the landscape architect Carlos Thays.

Ceiba insignis (Chorisia speciosa). Bombacaceae Family. Commonly known as silk floss tree, samohu.
It grows in Brazil, Paraguay, and Northeast Argentina. Its pinkish or whitish flowers are visible from late summer to mid-fall. Curiously, its trunk is studded with thick, sharp prickles; its fruits contain seeds surrounded by a white mass of fibrous fluffy matter. They appear very bright and colorful in Buenos Aires in the area of Plaza San Martín square, they are also present in the parks of Palermo and many other parks, squares, and streets.

Luma apiculata. Myrtaceae Family. Commonly known as myrtle, quetri, cuthu.
It grows in the Subantartic Forests, in the provinces of Neuquen, Rio Negro, and Chubut, near rivers and on lake banks. If you wish to visit the natural environment of the myrtle tree, you can go to Los Arrayanes National Park at the south of the province of Neuquen, which hosts the thickest forest of myrtle trees in Argentina.

Prosopis caldenia. Fabaceae, or Leguminosae Family. Commonly known as calden.
It is an endemic species; i.e., it only grows in Argentinamostly central region, especially in the province of La Pampa; this is reason why its coat of arms contains an image of a Calden. It also grows in San Luis, Cordoba, Mendoza, and Southwest Buenos Aires. If you wish to visit the natural environment of the calden tree, you can go to Parque Nacional Lihué Calel.